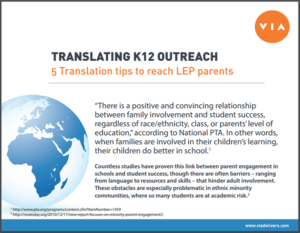 There is a positive relationship between parent engagement and student success. In other words, when families are involved in their children’s learning both at home and at school, their children do better in school, regardless of race/ethnicity, class, or parents’ level of education.

While, countless studies have proven the link between parent engagement in schools and student success, there are often barriers – ranging from language to resources and skills – that hinder adult involvement. These obstacles are especially problematic in ethnic minority communities, where so many students are at academic risk.

The 2011 census data tells us that 60.6 million U.S. residents, or 20.8% of the U.S. population, speak a language other than English at home. Of that 60.6 million, 75% of limited English proficient (LEP) speakers prefer to use their mother tongue.

Overcoming language barriers is a necessity

That said, it’s important that schools reach out to these parent populations especially those that are under-represented in four year colleges. In fact, Title VI requires districts to address language barriers and prohibits discrimination based on national origin in education programs and activities receiving federal financial assistance.

According to a recent press release from the U.S. Department of Education, its Office for Civil Rights (OCR) found Connecticut’s East Hartford Public Schools district violated Title VI of the Civil Rights Act of 1964 by failing to provide adequate language services to LEP parents and guardians and by unlawfully imposing barriers to enrollment and applying additional registration and enrollment criteria to students based on national origin.

On the other hand, we work with schools who are making great strides to connect with their ELL/ESL parents. One of our favorite examples is the Parent Academy for Student Achievement (PASA) at Kent School District. It’s a nine week course, with in-person meetings each week and a graduation ceremony at the end.

“When we ask students what the biggest influence in their lives in deciding to go to college is, they say it’s their families. In schools we tend to miss out on engaging families because there seems to be so many other competing priorities, particularly in high-needs schools,” said Daxa Thomas, Director of Family and Community Engagement at Kent School District.

Thomas says that these parents typically want to get involved, but what’s missing is the access. With approximately one counselor to every 400 kids, the counselors can’t give the individual attention that’s needed to help the kids and families.

"School systems are complex. Even for families who have been in the U.S. for a long time, everything is changing," said Thomas. "Often the minority and immigrant parents don’t understand the language or educational lingo."

So, Kent created PASA and translated the curriculum and materials for the top five languages in the School District: Arabic, Russian, Spanish (Latin American), Punjabi and Vietnamese.

With translation and localization, one is rarely used without the other. Substituting word for word with a translation dictionary, linguist, or MT might lead to technical proficiency, but it is often lacking the nuances or “spirit” of a text and how it is perceived by the target audience.

While translation may play a larger role by itself in simpler situations such as adapting a legal document or technical form, localization is particularly important with marketing campaigns or other communications that are meant to appeal to emotion or spur action as well as provide information.

Websites and other interactive online media rely extensively on both translation and localization to reach the broadest audiences, balancing the need for widespread appeal with the customized content that different regional and cultural groups might respond to best.

Project scopes and complexity vary and require different amounts of translation and localization. Working with an established Language Solutions Provider (LSP) can help you determine the best course of action for translating and localizing your content, while staying “on brand” and ensuring as much continuity as possible.