Legally Speaking: Do I really need that contract in two types of Spanish? 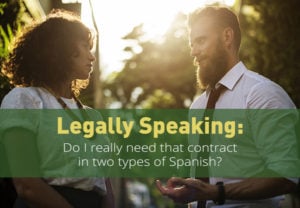 What might be more interesting, however, is the “why”.

Spanish is a vibrant and growing language that spread through Spanish Colonization to become the world’s second most popular language (Chinese is first and English third). With an estimated 470 million speakers, two main language groups have formed – commonly referred to as “Latin American Spanish” and “Spanish for Spain”. From the perspective of possible target markets, there are now approximately 420 million Latin American Spanish speakers and 50 million Spanish for Spain speakers. In addition, “Latin American Spanish” actually covers more than 19 countries; while there is significant language commonality within these countries, they are very different markets.

When considering the need to support contracts within a specific country, a lot depends on what you are doing with the contract. Generally, a “Spanish” speaker from anywhere in the world will be able to decipher the meaning of any form of Spanish given time and some flexibility for meaning. In this way, Latin American Spanish and Spanish for Spain can be seen as similar to US English and UK English.
If the purpose of the contract was for “general understanding” within an overall case load for litigation, you could translate fairly effectively into an “international Spanish” and any Spanish-speaking party would be able to understand the general gist and idea of the contract.

However, if the contract translation is intended to create the basis for a legal relationship, or the specific wording and meaning of the contract is in question - then the regional variances effectively eliminate the ability to serve the entire market with just one contract.

On top of specific legal technical differences, there are also common linguistic usage differences between Latin American Spanish and Spanish for Spain, such as the term used for “you”. Voseo—or addressing others in the second person, tu or vos—is common in some Latin American countries but no longer in Spain. While the contract could be “understood” to mean something, it may not explicitly use the accepted term; this could lead to dispute. Other challenges for a legally binding contract include differences in the use of tenses at a grammatical level and local idioms that have developed for common new technologies within Latin America. For instance, a cell phone is commonly teléfono móvil in Spain and cellular in Latin America. Another terminology difference: computer is ordenador in Spain and computadora in Latin America.

The net sum is: Unless your needs are for general understanding of a contract, choosing not to support both Spanish for Latin America and Spanish for Spain will add significant risk and might entirely eliminates the effectiveness of your contract. Be sure to think carefully about the intended demand of your translation before deciding which option is right for you.

WHAT IS UNIVERSAL SPANISH?