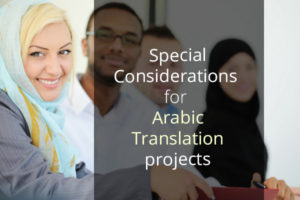 Arabic is one of the five most spoken languages in the world, and it's the fastest-growing language in the US. Whether you're trying to reach people in one of the 26 countries where it's an official language or trying to reach immigrant communities here at home, here are some special considerations for Arabic translation projects that you should be aware of:

Diglossia: Which version of Arabic does your audience speak?

As many as 422 million people speak Arabic.

But they don't all speak it the same way. In fact, some linguists aren't even sure that all of its dialects should be considered the same language.

Modern Standard Arabic (MSA) is the version of Arabic that's taught in schools. It's understood by most educated Arabic speakers, and used in most Arabic print and media.

Local spoken dialects are considered "colloquial Arabic." They can vary a great deal from one region to the next and are not always mutually intelligible.

So, which Arabic will your translation project use? Most likely, you'll translate into Modern Standard Arabic. That said, colloquial Arabic is sometimes used for poetry, advertising and TV shows.

The Arabic script is lovely, but challenging

The Arabic script is a lovely, flowing calligraphic script that poses special challenges for translators. First of all, it's written and read from right-to-left instead of left-to-right. And Arabic translations are usually about 25% longer than the English original text. So, the layout of your original document may need some alterations.

Often, line height needs to be increased to accommodate the change in script, as well.

Fun Fact: It's also an "abjad" script, which means it's almost exclusively made up of consonants. There are very few written vowels in Arabic. It's not that they don't exist in the spoken language. It's just that it's left to the reader to fill them in.

Can you use the Latin alphabet for Arabic? In some cases, but be careful.

Western technology companies have been exporting computers and other gadgets to the Arabic world for decades. The availability of Arabic keyboards and displays is a far more recent development. Some software still doesn't offer Arabic script as an option.

Use Arabic script for Arabic translation, if possible. It's more respectful. But if you need to translate into Arabic while still keeping the Latin script, there are a number of different ways to "romanize" the language, depending on the situation. Your translator can help.

Punctuation can get lost in translation.

In English, punctuation is vital. One misplaced punctuation mark can totally change the meaning of a sentence. For example, remember the joke about the panda that "eats, shoots and leaves?" Or, in the real world, the outcome of a recent legal case hinged on a single Oxford comma.

Written Arabic doesn't use punctuation as frequently as English. Punctuation rules are different, and more fluid. Some English punctuation marks, like the apstrophe and the semicolon, are missing entirely.

As this primer on legal translation between English and Arabic notes, "punctuation marks do not follow a well-defined rule in MSA in general and legal Arabic in particular. In legal discourse, the analysis shows the ungrammaticality of the punctuation system in Arabic, its fluidity and the lack of reference rules to be followed."

But just because the rules are more relaxed, that doesn't mean you can disregard them entirely. And you can't necessarily punctuate an Arabic sentence the same way you would an English sentence.

A skilled, native-speaking translator will ensure that your Arabic translation is punctuated correctly to communicate the same meaning as your source text.

For example, when it comes to legal translation, the vast difference between Western legal systems and Arabic legal systems makes it quite difficult to find the right words to translate from one to another.

This is why certain disciplines need specialized translators. At VIA, our translators are not only native speakers, they are also subject matter experts.

Terminology differences are another reason that developing a translation glossary or terminology is important, especially for specialties like law and healthcare.

When translating from English to Arabic, you also have to consider culture. Some words and images will impact Arabic audiences differently than they would Western audiences.

There's more to Arabic translation than meets the eye. The right translation team makes all the difference. Our award-winning translation process and experienced translators are the perfect combination. Contact us today at 1-800- 737-8481 for more information!