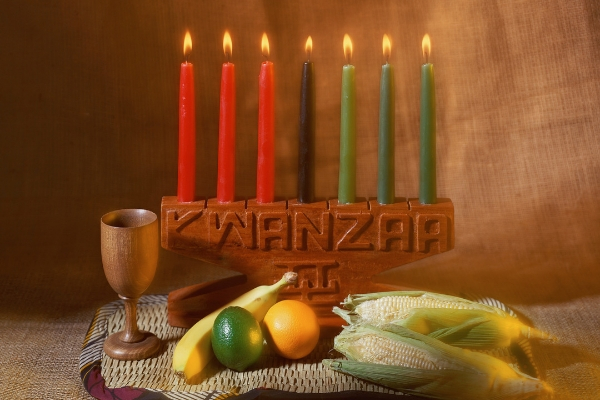 Kwanzaa begins the day after Christmas, running from December 26th through January 1st.  Compared to celebrations like Christmas and Hanukkah, Kwanzaa is a newcomer to the winter holiday scene. Unfortunately, that means it’s also one of the most misunderstood winter holidays, often treated as an afterthought.

To those who celebrate it, Kwanzaa is an important holiday with rich, meaningful traditions. So, if you’ve ever wondered “What is Kwanzaa?”, here are six facts you should know.

Kwanzaa was created in 1966 by Maulana karenga, a scholar and activist in the black power movement

According to the official Kwanzaa website, the holiday’s purpose is to reaffirm traditional the traditional communal values of African culture, to foster a sense of unity between Africans and people of African descent around the world, and as “an important way and expression of being African in a multicultural context.”

Although the holiday was created in 1966, it has roots in much older African traditions. The name “Kwanzaa” comes from the Swahili phrase “ ya kwanza,” which means “first fruits of the harvest.” The celebration itself is modeled after harvest festivals celebrated by many different African cultures.

Looking for a challenging language that could lead to a raise? Consider learning Mandarin, the most commonly spoken language in the world.

Many US-based companies depend on relationships with Chinese suppliers and manufacturers. Other businesses are expanding to court China’s growing consumer class.

Consequently, demand for Mandarin speakers is high. In 2014,  21,770 job openings in the US required fluency in Mandarin. That’s a drop in the bucket compared to the job openings for Spanish speakers. However, because Mandarin isn’t a common language to study, there’s not nearly as much competition.

Each day of the Kwanzaa celebration is dedicated to celebrating one of these principles:

The Kwanzaa feast, called Karamu, happens on December 31st. Kwanzaa, as with most holiday traditions, is full of delicious food and passed-down family recipes. Storytelling embodies a rich cultural tradition and practice in its recognition of family and community.

Swahili is the language of kwanzaa

Why Swahili? The language was chosen because it’s one of the most widespread languages of Africa. It’s the language of the Swahili people, but it’s also a lingua franca for eastern and southeastern Africa.

Since Kwanzaa was designed to be a Pan-African holiday, it made sense to choose an African language that wasn’t limited to one specific tribe.

To everyone celebrating Kwanzaa this week, United Language Group would like to say, “Heri za Kwanzaa!” (Happy Kwanzaa!)