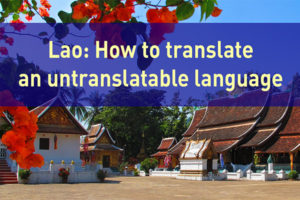 In the country of Laos, made up of many ethnic groups, the population speaks about 86 different languages! The lingua franca there is Laotian, also known as Lao or Thai Noi (“lao language”). It is the official language, where it is spoken by 3 million of the country’s 5.6 million people.

Laotian is also spoken in Thailand–where it is known is Isan language–and in Australia, Cambodia, Canada, France and the US.

LAO IS VERY DIFFERENT THAN ENGLISH.

OTHER LANGUAGES USE IT TOO!

WHERE DID THE QUESTION MARKS GO?

Traditionally, Lao script does not use spaces between words, or ending punctuation. Spaces are used between sentences and sometimes clauses.

In more contemporary writing it is common for writers borrow punctuation marks from the French. You’ll find exclamation points !, question marks ?, parentheses (), and «» and “ “ for quotation marks. Hyphens (-) and the ellipsis (…) are also commonly found in modern writing.

HOW IS LAO SCRIPT TRANSLATED?

It’s complicated. There is no official Latin transliteration system for Lao.

Translation
All human beings are born free and equal in dignity and rights. They are endowed with reason and conscience and should act towards one another in a spirit of brotherhood.
(Article 1 of the Universal Declaration of Human Rights)

Lao is a beautiful language that differs from English in some fascinating ways. But don’t let its complexity scare you! ULG’s team of native-speaking Lao translators can handle anything from marketing copy to complex legal and healthcare translation.