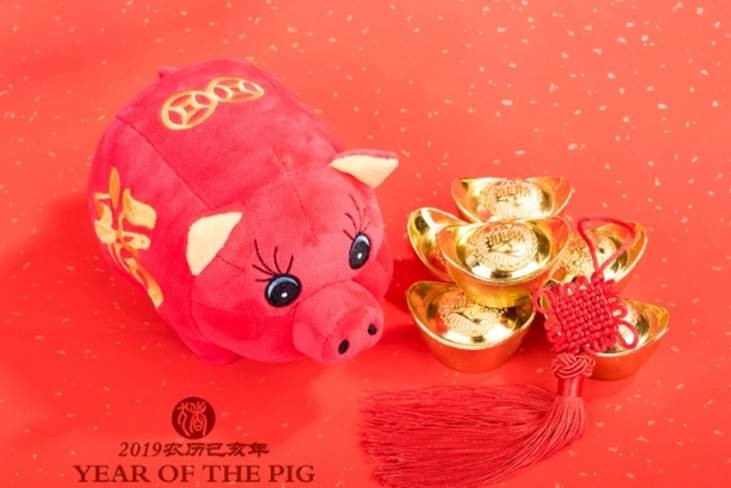 To celebrate, here are 7 facts about the Chinese New Year and the Year of the Pig.

the year of the pig begins february 5th.

The Chinese New Year celebration always starts on the day of the new moon between January 21st and February 20th. That means the exact date varies depending on the year.

The Chinese New Year, also called the Spring Festival, lasts 15 days. People begin celebrating the evening before the New Year begins. On the 15th day, the festivities end with a lantern festival.

the chinese new year isn't only celebrated in china.

Approximately one-sixth of the world celebrates Chinese New Year.  It's a public holiday in China, and also in Hong Kong, Taiwan, Vietnam, Singapore, the Philippines, and Malaysia.  Chinese New Year celebrations also happen in Chinese communities around the world, including major cities like New York, London, Vancouver, and Sydney.

almost everyone in china goes home to celebrate the chinese new year with their families.

The Chinese New Year (also called the Spring Festival) is the most prominent family holiday in Chinese culture.  More than 200 million people are expected to travel in the lead-up to the Spring Festival, making it the world’s largest human migration. The Chinese refer to it as  “chunyun (春运), or “Spring Migration.”

That said, affluent Chinese families may choose to spend the Chinese New Year somewhere else, taking a family vacation in another country.

the chinese new year is quite possibly the world's biggest night for fireworks.

As in other traditional New Year’s celebrations, fire and fireworks were traditionally believed to frighten off evil spirits.

in the chinese zodiac, the pig is associated with wealth.

The Chinese zodiac calendar runs on a 12-year cycle, with each year represented by a different animal. This year, 2019, is the Year of the Pig.  The Pig is the last animal in the zodiac sequence. According to legend, that's because when the Jade Emperor called a meeting of all the animals, the Pig overslept and was the last to arrive.

In 2020, the cycle will start over again with the Year of the Rat.

The color red symbolizes good fortune in the year to come. During the Spring Festival, it’s also traditional for older relatives to give younger relatives red envelopes full of cash. Good fortune, indeed!

what does the chinese zodiac say about newborns this year?

Is your family welcoming a little bundle of joy this year? According to the Chinese zodiac, some of your key personality traits are determined by your birth year. Each year is associated with not only a specific animal but also with an element like Earth, Fire, Water or Metal.

Babies born in 2019 are “Earth Pigs.” They are likely to be successful both socially and in their careers, but they may have to work at being successful in romance.  Pigs get along best with Tigers, Rabbits, and Goats. They may clash with Snakes and Monkeys.

Holidays like the Chinese New Year provide businesses with the opportunity to connect with customers in different countries and from different cultural backgrounds. However, to make that connection authentically, you need expert linguistic and cultural assistance. United Language Group can help. For more information, see the industries we serve and the services we offer, and contact us for a quote on your next language project today!

8 NEW YEAR’S TRADITIONS FROM AROUND THE WORLD

HOW TO HELP ELL STUDENTS START THE SCHOOL YEAR OFF RIGHT