At What Age Is it Easiest to Learn a New Language? 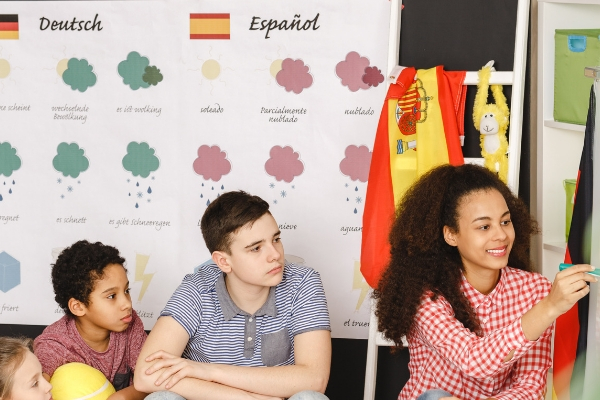 Are you trying to raise multilingual children? Or perhaps you’ve always wanted to learn a new language, but now you’re afraid you’re too old? If so, you may be asking yourself “ At what age it’s easiest to be taught a new language?” While scientists have researched the issue extensively, there’s no single answer that everyone agrees on, except perhaps “the earlier, the better.”

Here’s what we do know: the younger you are, the easier it is to learn a new language. Why is that? The reason has to do with the way we learn language as children and the way our brains change as we grow.

In childhood, our brains are primed to learn language naturally, as if by instinct. Just by listening, we intuit how grammar works for the language we hear around us.  Children raised in bilingual households can pick up grammar and vocabulary for both of the languages they hear, switching back and forth from one to the other as needed.

However, as we grow up, we start to lose that ability. For most of us, grammar stops being something we "just know" and turns into an arcane set of rules to memorize. We also lose our ability to easily hear and replicate sounds that don’t occur in our native language.

So, it's clear that childhood is a "critical period" for language development. What does that mean for young language learners?

the "best age" to learn a new language, according to science

Different scientific studies have attempted to determine when the “critical period” for language learning is over, with different and sometimes conflicting results.

For example, in a new study released in May 2018, researchers found that children maintain their natural ability to pick up the grammar of a new language until they are 17 or 18. However, they need to start learning that new language by the age of 10 to master it before the "critical period" ends.

However, according to an earlier study, the window of time when language learning comes naturally may begin to close as early as 5-7 years of age.

Meanwhile, a 2017 study found that Spanish-speaking babies age seven months to 3 years were able to learn English in addition to Spanish with as little as one hour a day of play-based instruction.

are you ever too old to learn a new language

Research aside, none of this should discourage adults from attempting to learn a new language. No matter how old you are, you’re never too old to learn a new language. However, because your brain’s ability to adapt and change decreases over time, you’ll probably have to practice more. Also, you’ll be more likely to struggle with grammar and pronunciation than you would if you’d learned the new language as a child.

However, it’s not all bad news. Learning a new language can help stave off dementia – even if you learn it as an adult!

what does this mean for businesses seeking language services

Since it becomes more challenging to learn new languages over time, seek out translators and interpreters who are native speakers of their target languages. At United Language Group, our linguists are all native speakers. They are also subject matter experts, with experience translating for your industry.

For more information, please take a look at the services we offer, and then contact us.

4 TRANSLATION TRENDS TO LOOK FOR IN 2019

WHAT WEBSITE LOCALIZATION CAN DO FOR SEARCH ENGINE OPTIMIZATION

WHAT IS A NOTIFIED BODY AND WHAT FUNCTION DOES IT SERVE?