The Top 5 Asian and Pacific Island Languages in the US 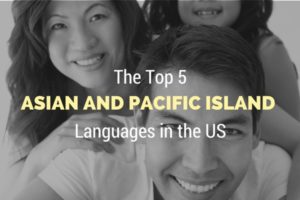 May is Asian-Pacific American Heritage Month. To celebrate, let's take a look at the top 5 Asian and Pacific Island languages in the United States.

Chinese is the most widely spoken language in the world, with somewhere between 955 million and 1.2 billion native speakers. 3.4 million Chinese speakers live in the United States, which makes it the third most common foreign language here.

Some linguists consider Chinese a language family rather than a single language. There's a good reason for this: "Chinese" contains hundreds of local language varieties, and many of them are not mutually intelligible when spoken.

While spoken Chinese varies considerably, all Chinese dialects use the same writing system. Since Chinese characters represent units of meaning instead of sounds, written Chinese is relatively consistent across the different dialects.

In China, the most widely spoken Chinese language is Mandarin. However, in the United States, Mandarin and Cantonese are tied for first place, followed by Hokkien.

Want to learn more about the various Chinese languages? Here's an informative video from LangFocus:

Tagalog is one of the official languages of the Philippines, where a quarter of the population speaks it as a native language. It's an Austronesian language, but it has quite a few loanwords from Spanish and English. "Taglish," or switching mid-sentence from Tagalog to English, is also common among younger Filipinos.

In the United States, Filipinos are the largest group of Asian Americans in the following states:

Meanwhile, Tagalog is the 3rd most spoken language in California, Nevada, and Washington. It's also one of the top 15 non-English languages in all states except Georgia, Massachusetts, Nebraska, New Hampshire, Ohio, Oregon, and Pennsylvania.

You can learn more about Tagalog and hear what it sounds like here:

Vietnamese is the national language of Vietnam. 75 million people around the world speak it as a first language. Meanwhile, 1.5 million people in the United States speak Vietnamese at home. The Vietnamese language is the 2nd most-spoken foreign language in Kansas, Arkansas, Colorado, Georgia Mississipi, Nebraska, Oklahoma Oregon, Texas. And it's one of the top 15 non-English languages in every state.

Vietnamese is written in the Vietnamese alphabet, which is a variation on the Latin alphabet that uses diacritics to indicate linguistic features like tones.

Learn how to introduce yourself in Vietnamese here:

Korean is the national language in both North and South Korea. It's not related to other Asian languages. In fact, it's a language isolate.

Around the world, about 80 million people speak Korean as a first language. In the US, approximately 1.1 million people speak Korean at home. There are thriving Korean communities in Los Angeles, New York, Washington, DC, and Seattle, as well as in many other cities and towns. Korean is one of the top 15 non-English languages spoken in every state.

For more about Korean, see Korean Translation: 8 Facts You Need to Know

Learn how to introduce yourself in Korean here:

The Hindustani Languages (Hindi and Urdu)

The Hindustani languages are spoken by 329 million native speakers, mostly in India and Pakistan. Hindustani consists of a pair of languages so close they could be twins: Hindi and Urdu. Hindi is spoken India, while Urdu is spoken in Pakistan. Hindi and Urdu are almost identical in many respects. However, there are a few crucial differences. First, they are written in different scripts. Like Sanskrit, Hindi is written in the Devanagari script. Meanwhile, Urdu is written in the Nastaliq script. There are also some differences in vocabulary since Hindi has more loanwords from Sanskrit and Urdu has more loanwords from Persian and Arabic.

Learn more about Hindi, Urdu and the differences between the two here:

Want to learn more about Asian and Pacific Island languages and culture?

Read about the languages of the Pacific Islands here, or find more facts about Asian languages and cultures here.

As you can see, Asians and Pacific Islanders have a significant presence in the United States. In heavily regulated fields like healthcare and education, that means you may be required to translate some of your business content into these languages. In other industries, translating may simply be a good idea to help bring in new customers.

Either way, United Language Group Company, can help. Contact us today to learn more about our award-winning translation process and how it can keep your organization running on time and on budget.

LANGUAGES OF THE PACIFIC ISLANDS