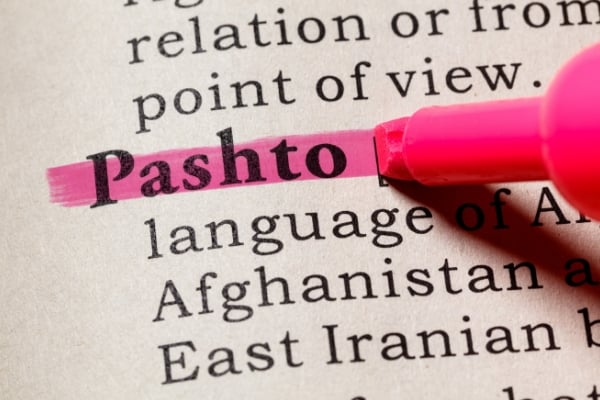 Have you heard of the Pashto language? If you haven’t, you’re not alone. Most Americans aren’t familiar with it, but perhaps we should be. It’s is the language of the Pashtuns, an ethnic group that has lived for thousands of years in what is now Afghanistan and Pakistan.  Here are five interesting facts about Pashto.

1) Pashto is one of the two official languages of Afghanistan.

The other language is Dari, which is descended from Persian. The two languages have coexisted in Afghanistan for centuries. Historically, most Pashtuns spoke Pashto. Dari was the language of the Afghan elite, including kings and the ruling class.

During the 1920s and 30s, the Pashto language became an essential symbol of Afghan identity. So, the ruling class began to study both languages. In 1936, King Zahir Shah formally made Pashto one of Afghanistan’s official languages.

Today, more than 50% of Afghans speak Dari, and the language is widely used for government communication. While education for children is available in both languages, most universities teach only in Dari.

2) There are nearly twice as many Pashto speakers in the world as there are Dutch speakers.

Approximately 40 million people around the world speak Pashto as a native language. Meanwhile, Dutch has only 22 million native speakers.

In addition to Afghanistan, 25 million people speak Pashto in Pakistan. The language is spoken in parts of Tajikistan, as well. Of course, expat communities of Pashto speakers exist around the world.

3) Pashto is written in the Arabic Naskh script.

Linguistically, Arabic and Pashto are quite different; however, if you don’t speak either language, you could easily mistake written Pashto for Arabic because they use the same script – almost. Since the languages are so different, Pashto uses a modified version of Naskh, with extra characters added to indicate certain sounds that Pashto has and Arabic doesn’t. This is why the Pashto alphabet has a total of 44 letters, compared to 28 for standard Arabic.

When translating material from English to Pashto, you may need to make some design changes to accommodate the different script. Also, care must be taken to use compatible fonts.

Otherwise, display errors can turn an excellent translation to gibberish.

4) There are 2–3 main Pashto dialect groups.

As with most languages, the way Pashto is spoken varies by region. Depending on which source you consult, there are two or three main dialect groups:

5) Pashto has a rich tradition of oral literature.

This tradition includes long-form poetry and stories. There is a genre of short folk poems composed by women, called landays, which describe the trials and tribulations of everyday life for Afghan women. They are typically sung aloud to the beat of a drum. They are quite challenging to translate, but Poetry Magazine has an excellent collection of them available online.

Understanding the nuance of global languages is key in simplifying communication and avoiding linguistic mistakes. Explore our blog for more information about languages across the world!

PERSIAN: A BEAUTIFUL LANGUAGE WITH A VIBRANT PAST