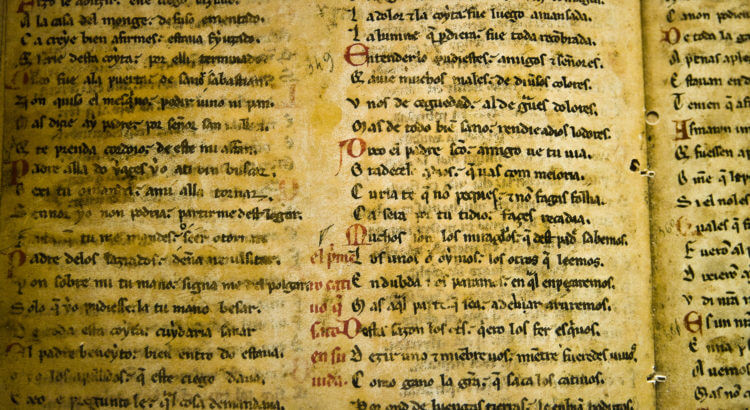 Translation crowdsourcing has its setbacks, but you’d think the practice could produce an accurate linguistic rendering over the span of 600 years.

That’s not true in the case of the Voynich Manuscript. The ancient, encoded text is said to date back to the late medieval period and has yet to be correctly deciphered.

The book’s text uses unfamiliar words that are only found in the vellum-paged manuscript as well as pictures of what seem to be plants and some amateur drawings of nude women. Numerous theories as to the book’s content have popped up since its discovery: it was the work of philosopher Roger Bacon, the 13th century Franciscan Friar interested in alchemy and science; the book has been left behind by aliens for their human counterparts to decode; or, there is some connection to Leonardo da Vinci.

The manuscript is seen by some as a hoax, merely a jumble of nonsensical words and pictures. Others see it as a mystery that could hold meaningful secrets.

The original text sits in the rare book library at Yale University in the United States, but last month it was revealed that a Spanish book publisher intends to clone and sell 898 copies of the manuscript for around $8,000 each. If you can pay a pretty penny, you, too, will have a chance to be part of the “crowdsourcing” effort to translate the text.

Relying on Others for the Answer

Crowdsourcing is a process in which ordinary folk are asked to help solve a problem. This usually takes place on the internet and involves the input from a large number of people. The results produced can be fruitful or frustrating, depending on a number of variables.

Translation crowdsourcing is cheap, and can be a good way to implement knowledge from a diverse audience of native and bilingual speakers. The downside is that asking laypeople to provide translations probably won’t produce the same quality results obtained by hiring a professional translator with subject matter expertise.

The absence of collaboration between crowdsource members is another problem. This means there will likely be inconsistencies when trying to establish a coherent voice. One word in one part of a country could mean something completely different in another region.

The enigma of Voynich has attracted the attention of scholars and non-experts alike. Said to be one of the text’s first owners, Holy Roman Emperor Rudolf II paid today’s equivalent to almost $100,000 in the 16th or 17th century to obtain the manuscript.

After changing hands over the years, in 1912 the book wound up in the possession of bookseller Wilfrid Voynich, and the manuscript has been named after him ever since.

Voynich sent a copy to William Newbold, a philosophy professor, who claimed the work was that of philosopher Roger Bacon. However, this theory has been debunked.

Some believe the book is one of botany and/or astrology, hence the pictures of what look to be plants and astrological signs. Others have suspected the author of the text could be Da Vinci. Amateur historians and linguists, along with those who are just intrigued by the subject, have dedicated vast amounts of time to cracking the code that is found in the Voynich Manuscript. Still, even with the help of scholars and laymen, there hasn’t been much progress in solving the text’s mystery.

The aged manuscript is proof of either one of two things: That crowdsourcing can be a drastic failure, unable to produce cogent answers over the span of more than 500 years, or, the Voynich Manuscript is a fake.

Whatever the case may be, unsuccessful attempts at decoding the book have definitely not deterred the enthusiasms of those interested in the text to this point.

For those trying to decipher known languages instead of the cryptic text of Vonyich, it’s best to stick to the translation industry’s best practices. When taking on a project, it’s important to know your audience, whether you’ll need a language services provider (LSP) like ULG, and how to implement technological solutions to improve turnaround and savings. If done right, translation isn’t a cryptic process.

A DAY IN THE LIFE OF AN LSP PROJECT MANAGER

OUR UNIQUES: WHAT MAKES ULG'S TRANSLATION AND INTERPRETATION SERVICES DIFFERENT