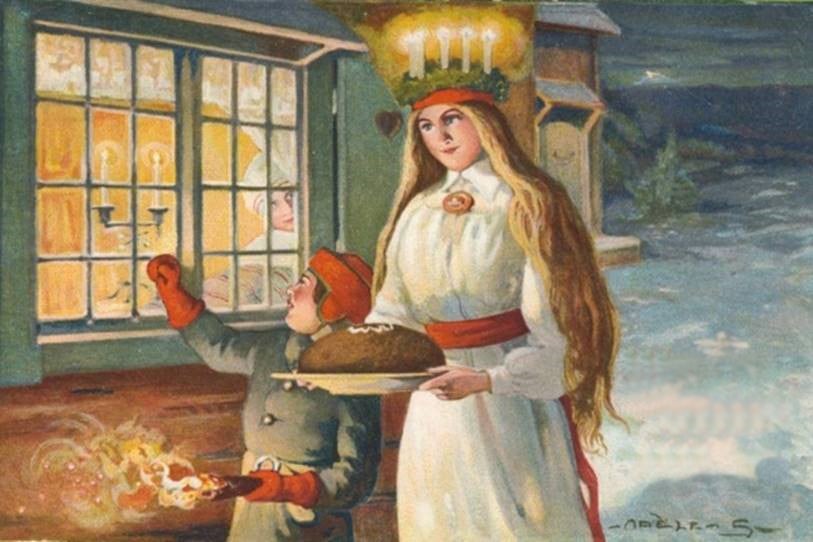 December 13 is just another day to most Americans, however, in Sweden, it's a holiday.  Saint Lucia's Day is one of the most unique elements of the Swedish holiday season. Here are five facts about this Swedish tradition.

St. Lucy was one of the early Christian martyrs and the monks who brought Christianity to the Nordic countries. She also brought along tales of her martyrdom.

Like most early Christian martyrs, St. Lucy is known for her good works in life and a violent death. According to legend, she would carry food and water to Christians who had been forced to hide out in the catacombs of Rome. The catacombs were dark, and Lucy needed her hands free to carry supplies. So, she engineered an ancient version of a headlamp, wearing a wreath of candles on top of her head to light the way.

St. Lucy died a horrible, gruesome death in 304 AD after she refused to give up her vow of chastity to marry the pagan to whom she was betrothed.

Why did St. Lucia's Day become such a big deal in Sweden (along with the other Scandinavian countries)?  Perhaps, it’s because the holiday symbolizes light in the middle of long, dark Nordic winters.

In the old “Julian” calendar, St. Lucia’s Day generally fell on the same date as the Winter Solstice, when the days finally start to get longer again. In Sweden, it has come to mark the end of winter’s darkness and cold.

during st lucia's day, young girls walk around wearing candles on their heads

To commemorate St. Lucia, young girls traditionally wear wreaths on their heads, often covered in candles. Children will use battery-powered candles for safety’s sake. However, preteens and teenagers sometimes upgrade to the real thing.

Towns and schools often elect a local girl to be St. Lucia for the year. Girls used to compete for the honor, but these days Lucia is usually selected at random so that it doesn't turn into a popularity contest.  On St. Lucia's Day, she’ll lead a parade of young girls and boys, all wearing white and carrying candles.

Meanwhile, at home, the eldest daughter traditionally plays the role of St. Lucia for the family, serving them baked goods and coffee while wearing a white dress and a crown of candles.

It includes a type of saffron bread called lussekatter, shaped like a curled-up cat. Gingersnaps are another seasonal favorite with hot glogg (mulled wine) and coffee wash it all down.

nobel prize winners are treated to an early-morning wake-up call from st. lucia and her attendants.

It's one of the perks of being a Nobel laureate, as the prizes are handed out a few days before Saint Lucia's Day.

Each culture has its own unique way to celebrate the holidays. If your business is trying to communicate across cultures, it helps if your content aligns with the local language and local traditions. At United Language Group, we’re here to help. Check out the services we offer and the industries we serve, and contact us for your next language project.