Persian: A Beautiful Language with a Vibrant Past 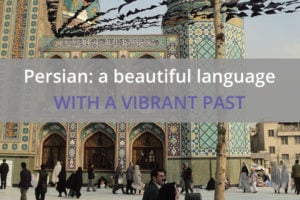 Do you know much about Persian? This ancient language is one of our favorites, and we're learning a bit about its complex past.

The History of Persian

Persian—also known as Farsi by native Iranian speakers—is spoken by more than 120 million people worldwide. It is the national language of Iran, Afghanistan and Tajikistan, and is still widely spoken in areas that used to be known as Greater Persia: Uzbekistan, Russia and Azerbaijan. According to Omniglot, there are also significant numbers of speakers in other countries including Bahrain, Iraq, Turkey, Kuwait, Israel, Turkmenistan, Oman, Yemen, the UAE and the U.S.

It has often been described as a very soft, song-like language. Grammatically, it is a very approachable language to learn.

According to Wikipedia, Persian is among the oldest Indo-European languages, with a history stretching back to before 500 BCE. In the High Middle Ages it was already widely spoken, and was adopted for official governmental use by the Mongolian and Turkish rulers in what is today Turkey, central Asia and India. The Persian language had a long history of literature as Middle Persian before Islam, it was the first language in the Muslim world to break through Arabic’s monopoly on writing. Famous Persian poets such as Hafiz, Rumi and Omar Khayyam remain influential in the West. Persian calligraphy remains a vibrant art form today.

There are various forms of Persian spoken in the Middle East today:

What are the Persian writing systems?

Interestingly, native speakers can often understand early Persian texts because the morphology, or word form, has been relatively stable for the over a thousand years!

Across the globe, languages continue to mix and influence each other.

According to Wikipedia, John R. Perry, in his article Lexical Areas and Semantic Fields of Arabic, estimates that about 24% of an everyday vocabulary of 20,000 words in current Persian are of Arabic origin.

According to the BBC, you'll find hundreds French words in everyday Persian due to the long historical relationship between Iran and France. The Persian word for thank you, مرسی , mersi, is quite similar to the French word. Other similar words include:

The BBC also states that due to Persia's historical relationship with Britain, you'll find many Persian words in current English:

Some words have multiple meanings in Persian, so you need to be sure that your translator is using the right context! From the BBC:

Persian is a beautiful language that differs from English in some fascinating ways, but don’t let its complexity scare you! If you need help with Persian translations, contact a team of professional linguists. To learn more about a variety of global languages, explore the rest of our blog!