Languages of the Pacific Islands 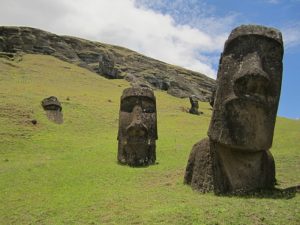 May is Asian-Pacific American Heritage Month. Many organizations celebrate this this month, including The Library of Congress, National Park Service and the Smithsonian Institution. We’re joining them in paying tribute to generations of Asian and Pacific Islanders who enriched America’s history and are instrumental in its future success. Here is a little insight into the languages used in the Pacific Islands, which are broadly divided into three racial/cultural groups: Polynesia, Micronesia and Melanesia. The languages spoken on the islands belong to the family of Austronesian languages.

While some of the languages included in the Austronesian family have only a handful of speakers, the major Austronesian languages have tens of millions of speakers. For example, in Melanesia roughly one language is spoken for every 1,500 people. Malay, on the other hand, is spoken by 250 million people, making it the 8th most spoken language in the world.

The languages of island nations in Polynesia and Micronesia are very similar in phonetics and meaning. In fact, one can often work out the general gist of a conversation from another country or island if they belong to the same group.

Most Melanesian countries, with the exception of Fiji, speak a form of broken English called Pidgin English or Bislama with which they can understand each other. In Hawaii they speak a variation of Pidgin called Hawaiian Creole. These languages often relate to the environment and are practical and functional, so they’re rarely used to discuss abstract or theoretical ideas.

An important aspect of Austronesian languages is the use of speech styles based on social context, which employ their own vocabulary, grammar, and even intonation. For example, Javanese uses three speech levels distinguished by vocabulary: Kromo, used when speaking to socially superior persons, Ngoko, used when speaking to inferiors or equals, and Madya, a mixture of Kromo and Ngoko.

Therefore, when translating materials for people in the Pacific Islands it is important to identify the specific regions you are translating for to determine which languages they speak. Can you get away with translating into Malay or do you need to translate into Tongan or another Polynesian language? In addition, you will want to work with in-country stakeholders to determine what tone is most appropriate before beginning your projects.

Have questions? We’d love to help. Contact us today.

THE EARLY DAYS OF TRANSLATION TECHNOLOGY

NOVEMBER: A GLOBAL CULTURAL TRADITION OF GIVING THANKS

TRANSLATION AT THE WORLD CUP: 4 LESSONS FOR BUSINESSES