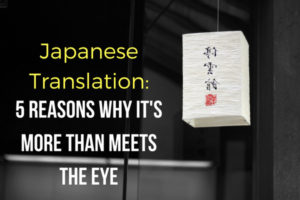 Japanese is a rich language with an ancient history and global clout to match. It's the language that gave us anime and the haiku. It's also the language of the world's 3rd largest economy. Want to learn more?

Here are five reasons why there's more than meets to the eye to the Japanese language and Japanese translation.

Although the country is only about half as big as the state of Texas, Japanese is the 9th most spoken language in the world. As you might expect, most native speakers are in Japan. But not all of them.

For example, 12% of Hawaii residents speak Japanese. There are 436,000 Japanese speakers living in the US, with the largest communities in California, Washington, and Oregon. As a result, US companies doing business in those states may need to translate some of their business content into Japanese to reach their customers and to ensure compliance in some industries.

Did you know? 3.2% of all Internet users speak Japanese, making it the 6th most common language online.

The Japanese language has many different ways to communicate politeness and social status.

There are 3 main categories of honorific speech in Japanese:

These categories are distinguished by different vocabulary, word endings, and alternative verbs.

Want your content to connect with readers? Start by addressing them appropriately. Our native-speaking translators will help you get the nuances right!

According to Wikipedia, the Japanese writing system "is often considered to be the most complicated in use anywhere in the world."

What makes it so complicated? Well, to start with, there's four types of writing to contend with:

When translating from English, the Japanese translation typically requires more space both vertically and horizontally, even if the character count goes down. This is because the Japanese script is more intricate than the Latin alphabet. Therefore, more space is required between characters to keep the text readable. Japanese characters also tend to be taller.

If you're working on a document or a website and you plan to have it translated into Japanese, use a layout that's flexible enough to accommodate the extra space. You'll save time and money!

Japanese is a beautiful language that differs from English in some intriguing ways. But don't let its complexity scare you! VIA's team of native-speaking Japanese translators can handle anything from marketing copy to complex legal and healthcare translation.

For example, VIA helped Webtrends create a localized version of their website, one of their key analytics products, and online lessons for potential customers. Download the case study here.

10 INTERESTING FACTS ABOUT THE IRISH LANGUAGE