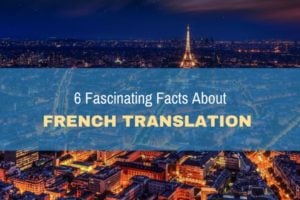 It's become somewhat fashionable to declare that the French language is fading, washed-up, just a shadow of its former self. That's simply not true. While the world has changed since the days when French was the main international language of diplomacy (where we get the term lingua franca), French remains an important language. And there's reason to believe it's becoming more important for international businesses and organizations, not less.

Not convinced? Here are 6 facts about French translation and the French language that might surprise you:

In fact, French is an official language in 29 countries, including:

French remains an administrative language in Cambodia and Laos, and a diplomatic language in Vietnam. Additionally, it's a common second language in Lebanon.

It's also an official language of some important international organizations like the United Nations, the European Union, NATO, the World Trade Organization and the Red Cross.

French is one of the most important languages for international business.

In 2011, a Bloomberg Rankings report called French the 2nd most powerful foreign language for businesses (not including English). Only Mandarin Chinese ranked higher.

French translation is key for organizations doing business in Africa.

Which continent has the most French speakers? Surprise: it's not Europe, it's Africa!

French is an important legal language, even outside of Francophone countries.

Do you think legal translation in French only applies when French speakers or French-speaking countries are involved? Think again!

It's difficult to overestimate the importance of French to the international judicial system, since it's an official or working language in all of the following international and regional court systems:

How French is spoken depends on where it is spoken.

Check out our post on Canadian French vs. French to see how the French language differs between France and Canada as just one example of regional variations. Of course, the Francophone African countries also have their own dialects. It's important to keep regional variations in mind when creating French content for international use.

Does your organization need French translation services? VIA will make sure your content gets translated by native speaking translators who understand the needs of your target market and are experts in your subject matter. Want to learn more about our team and our award-winning project management process? Give us a call at 1-800-737-8481!