5 Facts About the Portuguese Language That Might Surprise You 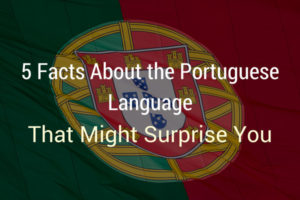 In the world of languages, Portuguese is an up-and-comer. No longer stuck in the shadow of Spanish, it now has too many speakers and too much economic muscle for global businesses to ignore.

How much do you know about the Portuguese language? Here are 5 facts that might surprise you.

Portuguese is the 6th most spoken language in the world.

There are also around 1,228,126 Portuguese speakers in the United States. The three largest Portuguese-American communities in the US are located in Providence, Rhode Island; Boston, Massachusetts; and the New York/Northern New Jersey area.

Did you know? Only 5% of Portuguese speakers live in Portugal. Most live in Brazil. In fact, São Paulo, Brazil has the most Portuguese language speakers in one place in the entire world!

What’s the fastest-growing European language after English? It’s Portuguese, thanks to the rapidly growing populations of Portuguese speakers in Brazil and Africa. According to UNESCO, the language has high growth potential as an “international communication language in Southern Africa and South America.”

And while the Brazilian economy is currently struggling to emerge from a recession, it’s still the eighth largest in the world and largest in Latin America.

That’s because Portuguese is closely related to Spanish. In fact, the two languages share 89% of their vocabulary and grammar. Despite the resemblance, however, Portuguese and Spanish are not mutually intelligible.

Are you in the market for Portuguese translation services? Here’s an important question to answer first: what type of Portuguese?

You’ve probably heard that Americans and the British are “divided by a common language,” right? Well, so are Brazil and Portugal. Brazilian Portuguese and European Portuguese are almost the same . . . but not quite. There are differences in grammar, spelling and the meanings of certain words.

One of the biggest differences between the two varieties has to do with você and tu. Both are second-person singular pronouns, equivalent to “you” in English. But in Portugal, você is used in more formal situations. Tu is more informal. In Brazil, on the other hand, most people use você in both formal and informal situations (although some regions do use tu.)

The differences may seem small . . . but they matter. For example, consider how confused you would be if you bought a package of “biscuits” at the store and came home with what we Americans think of as “cookies” instead?

So, how do you know which type of Portuguese to use? That’s one more good reason to know your audience, as well as any applicable laws and regulations.

English Text Is Longer In Portuguese

English text translated into Portuguese typically expands anywhere from 15 to 30%. That’s why it’s so important to keep layouts flexible for content you plan to have translated.

Looking for an accurate Portuguese translation? This should go without saying, but don’t use Google Translate. As this article from a Portuguese teacher demonstrates, Google Translate has trouble correctly parsing various characteristics of the Portuguese language, including gender, singular versus plural nouns, idioms and more.

Need some help communicating with Portuguese-speaking customers? VIA’s team of native-speaking translators is here to help. Give us a call today at 1-800-737-8481 to learn more about our company, our expert translators, and our award-winning translation process!

SPEAKING AROUND THE BOOT: THE REGIONAL LANGUAGES OF ITALY