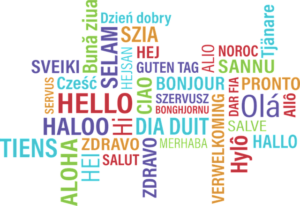 Linguadiversity, or the diversity of languages and of cultures, celebrates that all languages have their individual identity and value, and all are equally adequate as modes of expression for the people who use them. These local languages, especially the minority and indigenous ones, transmit cultures, values and traditional knowledge, playing an important role in promoting sustainable futures.

The United Nations Educational, Scientific and Cultural Organization (UNESCO) felt so strongly about linguadiversity they proclaimed February 21 is International Mother Language Day in November 1999 "to promote the preservation and protection of all languages used by peoples of the world". This year’s theme is “Towards Sustainable Futures through Multilingual Education.”

“Languages are the most powerful instruments of preserving and developing our tangible and intangible heritage. All moves to promote the dissemination of mother tongues will serve not only to encourage linguistic diversity and multilingual education but also to develop fuller awareness of linguistic and cultural traditions throughout the world and to inspire solidarity based on understanding, tolerance and dialogue.”

UNESCO also created its Atlas of the World’s Languages in Danger to raise awareness about language endangerment and the need to safeguard the world’s linguistic diversity among policy-makers, speaker communities and the general public, and to be a tool to monitor the status of endangered languages and the trends in linguistic diversity at the global level.

At VIA we’re often asked “Why do I need to localize my marketing materials when everyone speaks English?” It turns out that 75% of non-English speakers say they want products in their native language and 56.2% say information in their own language is more important than price!

Check out this infographic, “Why localize?” for fun facts about the business value of localizing content for your target market: http://bit.ly/1oNy1m9.