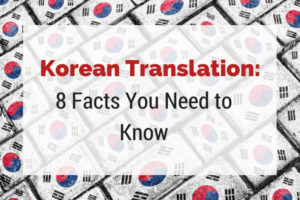 Although it’s often overlooked in favor of Chinese or Japanese, Korean is a unique and fascinating language. Are you considering translating some of your business content into Korean? Are you looking for Korean translation services? Or do you simply love learning about other languages?

Either way, here are 8 facts you need to know about Korean translation.

KOREAN HAS MORE NATIVE SPEAKERS THAN FRENCH (AT LEAST BY SOME ESTIMATES.)

The Korean language has 76-77 million native speakers as of 2007, compared to 75 million for French.

Korean is an official language in both North and South Korea. That said, you’ll find Korean immigrant communities across the globe. For example, in California, the Los Angeles area has the largest population of ethnic Koreans outside of the Korean peninsula.

And you can also hear and see Korean even in places you might not expect. For example, Atlanta, Georgia has approximately 50,000 individuals of Korean descent. It also has 4 Korean-language television stations and a daily Korean newspaper. Even smaller cities and towns sometimes may have significant populations of native speakers who require Korean translation, especially for critical subjects like health care and legal matters.

KOREAN IS A LANGUAGE ISOLATE.

Although there are a few extinct languages thought to have been in the same family, the Korean language is an orphan, with no living relatives.

King Sejong the Great invented the Hangul script in the 15th century as a way to increase the literacy rate among the Korean people. Before that, Korean was written with Chinese characters called hanja. Hanja are still used in certain limited circumstances today.

Korean is one of the top 10 languages online.

According to Common Sense Advisory, Korean is number 10 on the list of the top 10 languages that reign online.

Translating a document into Korean? Triangles are a bad idea.

Triangles have “negative connotations” in Korean culture. It’s best to avoid them in graphics, documents, promotional materials, and business presentations.

Korean translations usually take up less horizontal space than the English source text. On average, the Korean version contracts by 10-15%. However, hangul is also taller than Latin text. So, it requires more line height. And since the characters are more complex, the designer may need to increase the font size to keep the writing legible.

Status indicators are extremely important in both written and spoken Korean.

Korean uses a system of honorifics to indicate the writer’s relationship to the audience. Korean honorifics include nouns, verbs and honorific forms of address. It’s vital to know your audience and address them appropriately. If you use the wrong honorifics, your readers may take offense.

Doing business in South Korea? According to the Korea Times, 45% of Koreans have limited English proficiency. So, don’t rely on your customers to speak English!

As you can see, Korean requires a certain amount of expertise. At VIA we use native-speaking translators who understand both the language and the culture. This ensures that your Korean audience gets an accurate translation and your message comes through clearly every time.

For more information about our expert translators and award-winning translation services, call us today at 1-800-737-8481!