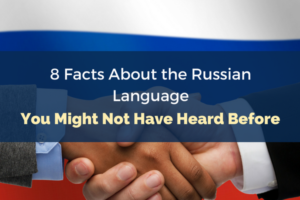 There's no way around it - Russian is an important language. In fact, Russian is one of our most-requested languages.

Here are eight interesting facts about Russian language and translation that you may not know:

That's around 2.4% of the world's population, and it makes Russian the 8th most-spoken language in the world.

Russian is an official language in Russia, Belarus, Kazakhstan, and Kyrgyzstan.

That said, these are far from the only places where people speak Russian. For example, it's also used for some government functions in Uzbekistan, Tajikistan, and Turkmenistan. And it is also a significant language in parts of Ukraine.

Of course, you'll also hear Russian in Russian expat communities around the world, including the United States. In fact . . .

Russian is one of the top 15 non-English languages in 47 states. Why is that important? Well, if your organization is a "covered entity" under the Affordable Care Act, that means you need to provide taglines in

Russian in all 47 of those states to remain compliant.

In the US, the following six states have the most Russian speakers:

According to the US Foreign Service, Russian is a difficult language for Americans to learn.

However, it's not the most difficult. Russian is a "Category 3" language, which makes it about as challenging to learn as Hindi or Thai. Languages like Arabic, Mandarin Chinese, and Korean are even more difficult.

About 10% of Russian words resemble their English counterparts. But don't get too comfortable with guessing.

These are also many words that look or sound the same but have different meanings between the two languages. For example, in English, "angina" means chest pain. But the Russian word Ангина means tonsillitis, a much less severe affliction (and all the more reason that limited English proficiency healthcare patients need access to information in their own languages!)

However, the Cyrillic script was not developed in Russia. Instead, disciples of St. Cyril and his brother, St. Methodius, designed it based on the Greek alphabet during the first Bulgarian Empire.

So while some people call the Cyrillic script "the Russian alphabet," it might be more accurate to call it "the Bulgarian alphabet."

Additionally, the Cyrillic script is named after St. Cyril, but it was developed by his disciples, not by the saint himself.

Some of the letters are pronounced quite differently than English speakers might assume. For example, Д may look like a variation of our letter "A."

However, it was actually derived from the Greek letter Delta. And it's pronounced like "d" as in dolphin.

Russian has less than half the number of words as English.

There are about 200,000 words in the Russian language, compared to more than one million in English. But of course, that doesn't mean that Russian speakers are less able to express themselves. It just means that there are more words in Russian with more than one meaning. And that makes a qualified translator even more crucial!

Text translated from English to Russian usually expands by around 15%.

Meanwhile, text translated from Russian to English usually contracts by the same amount.

Ideally, that means you'll start out with a flexibly designed document, created with translation in mind. Check with your language services provider for recommendations, or for help redesigning materials as needed.

Want to learn more about VIA, a United Language Group Company, and our award-winning translation process? Give us a call at 1-800-737-8481 today.

Russian has less than half the number of words as English.

There are about 200,000 words in the Russian language, compared to more than one million in English. But of course, that doesn't mean that Russian speakers are less able to express themselves. It just means that there are more words in Russian with more than one meaning. And that makes a qualified translator even more crucial!