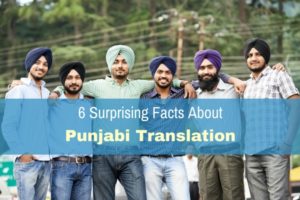 Punjabi is the 10th most widely spoken language in the world.

Most Punjabi speakers live in India and Pakistan . . .

Punjabi is one of 22 scheduled languages in India. That means that the Indian government is obligated to protect it and ensure its continued use and development. Punjabi is also an official language in Delhi.

However, across the border in Pakistan, Punjabi lacks official recognition and support. There, Urdu and English are the only official languages, used in government and schools. Oddly enough, though, Punjabi is the most commonly spoken language in Pakistan.

But there are also sizeable communities of Punjabi speakers in the UK and Canada.

In fact, Punjabi is the 3rd most-spoken language in the United Kingdom. Meanwhile, in Canada, it's the 4th most common language, after English, French, and Mandarin. In 2015, it became the third language of the Canadian House of Commons.

In the US, Punjabi is one of the top 15 non-English languages in 4 states: California, Indiana, Mississippi, and Washington.

An important note for the healthcare industry: that means that Punjabi taglines must be provided on all critical documents to help Punjabi-speaking customers access language resources.

Punjabi is one of the few Indo-European languages with lexical tone.

In English, as well as most Indo-European languages, the tone of voice carries information like emotion or emphasis. But it doesn't help you distinguish between one word and another. In tonal languages like Punjabi, however, tone and pitch can indicate a difference in meaning between two words that otherwise sound the same.

Punjabi can be written in different scripts.

Punjabi is also one of the few languages with digraphia, which means that it uses at least two writing systems. So, how do you know which script to use? As always, paying attention to the demographics of your audience is crucial!

Usually, Punjabi is written in one of two scripts. The Shahmukhi script is primarily used by Punjabi Muslims and in Pakistan. Meanwhile, Sikhs and Hindus favor the Gurmukhi script. The Gurumukhī script is also used in Indian offices, schools, and in the media. Occasionally, Punjabi is written in the Devanagari script (commonly used for languages like Hindi) or the Roman alphabet.

There's more to translating Punjabi documents than simply translating text from one language to another. Because Punjabi uses a non-Roman script, it's more complicated than substituting one text for another. For example, both the Shahmukhi and Gurmukhi scripts require more vertical space than Latin text. So, you may need to change the layout to keep the resulting documents attractive and easy to read.

Punjabi fonts can be tricky, too. Change from one Punjabi font to another, and you might unintentionally change the characters, resulting in incorrect or gibberish translations. That's why it's so important to have a native-speaking translator available to help proofread the final copy.

VIA's team of native-speaking translators is here to keep your Punjabi translations accurate, on brand, and in compliance.

Want to learn more about VIA and our award-winning translation process? Contact us today.