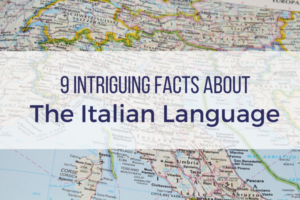 When it comes to sheer numbers of speakers, Italian can't compare with languages like English and Chinese. And yet, it's one of the most popular and influential languages in the world. Chances are you've probably spoken at least a little bit of Italian today, whether you were aware of it or not. For example, you might have ordered a pizza, visited a bank, or sipped a cappuccino, all Italian words.

But beyond Italian food and famous artists, how much do you know about this interesting and beautiful tongue? Here are 9 facts about the Italian language you might not have heard before.

Around the world, between 63.4 million and 85 million people speak Italian as their first language.

According to Ethnologue, Italian is 21 on the list of the world's most widely spoken languages. As you might expect, most Italian speakers (around 58 million) live in Italy. But as many as 64 million people in the European Union are native Italian speakers. That makes it the third most common native language in the EU.

Italian is not just the official language of Italy.

It's also an official language in Switzerland, San Marino, Vatican City, Istria County in Croatia and Slovene Istria in Slovenia.

The European Union uses Italian as one of its 24 official and working languages. And it's a recognized minority language in even more countries, including Bosnia/Herzegovina, Croatia, Slovenia, and Romania.

Additionally, Italian is the second most common language in Argentina. In certain parts of Brazil, it's a regional language and schools are required to teach it.

Italian is "the language of love."

Well, one of them, at any rate. Italian and French seem to be constantly vying for the title. But according to this CNN poll, native English speakers rated Italian as the "sexiest accent." There's just something about all those vowels . . .

Italian is also the language of music.

Even if you don't play an instrument now, you probably learned a few words of Italian during music class in elementary school. Words like tempo, crescendo and soprano are all Italian. But why is that?

One reason is that the inventor of modern musical notation, Guido d'Arezzo, was Italian. Another reason is simply that all of these musical terms were developed during the Renaissance or shortly thereafter. And during this time period, Italian composers dominated European music.

Italian was originally a literary language, used by writers and poets.

After the fall of the Roman Empire, regional languages evolved throughout what is now Italy, branching off from Latin over time. But in the 14th century, at the height of the Renaissance, elite Italians began to adopt the Tuscan version spoken in and around Florence. Made popular by writers like Dante, Petrarch, and Boccaccio, it was the main source for the standardized Italian used today.

Italian didn't become the official language of Italy until 2007.

That's right. Are you surprised? Well, consider the following:

Standardized Italian is a rather recent invention. Prior to unification, Italy was a collection of city-states. They had a lot in common culturally. But they spoke different, yet closely related languages. And if you've read The Divine Comedy, you might remember that the different city-states didn't always get along.

Italy did not become one independent country until 1861. At that time, less than 10% of Italians spoke standardized Italian.

After unification, children began to learn standardized Italian in schools. So, the number of Italian speakers grew rapidly. Still, even today 50% of Italians speak a regional language in addition to Italian.

What Italian language? Italian has both regional languages and regional dialects.

Now here's where things get confusing. Some linguists classify the languages spoken before unification, like Venetian and Neapolitan, as languages in their own right. After all, they evolved separately from Latin and can differ a great deal from each other. But it's not uncommon to hear these regional languages referred to as "dialects."

Meanwhile, Italian also has "dialects" in the more traditional sense: regional variations in the way standard Italian is spoken. Often, these dialects are influenced by the underlying regional language.

For example, here are 3 different possible translations for "we are arriving":

The word "America" comes from Italian.

That's right. "America" is named after Amerigo Vespucci. This 15th-century Italian explorer was the first European to recognize that North and South America were separate continents, not part of Asia.

The number of Italian speakers in the US has declined in recent years. But there are still some neighborhoods where Italian is common, especially in the Northeast. For example, it's the 6th most common non-

English language in New York, and the 7th in New Jersey. That has compliance implications for healthcare providers, insurance companies, educators and other service providers.

Need help translating your content into Italian? Our team of native-speaking translators is here to help.