How to communicate with the rich diversity of Spanish speakers in the U.S. 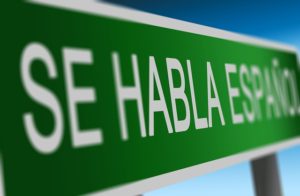 How to communicate with the rich diversity of Spanish speakers in the U.S.

Spanish is the second most widely-spoken language in the world (after Mandarin Chinese) with more than 400 million native speakers in 31 countries. It is also the third most widely used language on the internet. The United States alone has approximately 37 million Spanish speakers, making it the world's second-largest Spanish-speaking population.

What makes the Spanish-speaking population in the U.S. unique is that it is made up of people from several different countries in Latin America. This multitude of backgrounds means that Spanish speakers in the U.S. do not share one culture or dialect, so it may be best to use a “generic” or “universal” Latin American Standard Spanish when translating for the greater U.S. market. Translating into this “generic” variety helps to avoid regional or dialectal terminology so content can be understood by Spanish speakers of any background. In 2015, VIA’s linguistic teams translated over five million words into this “LatAm” Spanish.

On the other hand, if you know the country of origin for your audience, consider using a specific variety of Spanish (such as Spanish-Mexico) to better serve your customers from those countries. When discussing translation projects with your linguist, make sure to communicate information about the target locale of your audience. If the translation is directed at patients in Southern California (where Spanish from Mexico is more common) versus at parents of school children in New York city (where there is a mixture of origins including Caribbean and South American countries), the word choices and eventual output may be different.

Food is one subject where this happens regularly. For instance, there are various terms used in Latin America for “beans”. Because of the different origins of Spanish speakers in the U.S., it is not uncommon for reviewers to have feedback like “We do not call peas ‘chícharo’ in my country, but ‘guisantes’.”

The best way to address this potential issue is to establish a glossary early on, and get consensus on the correct dialect and terminology before the project begins. Check out this sample English-Spanish Terminology Guide we created to help you get started.

Also, keep in mind that English to Spanish translations expand 25% on average. If you have forms or brochures with tight formatting, trim the content to gain whitespace or work with your project manager to come up with alternative formatting solutions before the translation begins.