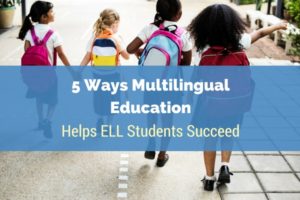 International Mother Language Day has a different theme each year. Last year's theme was "Towards Sustainable Futures Through Multilingual Education." But what is multilingual education, why is it important? And

is it as important in countries where the majority of people speak English?

What is multilingual education, anyway?

Multilingual education means that students are educated in their mother tongue when they begin school, even if they don't speak the dominant or official language. Later on, students who have learned to speak the official language are taught in both languages.

Why do students need multilingual education?

Forget what you might have heard about ELL students needing to be taught in English as much and as early as possible. Research shows that children learn better when they are taught in their mother tongue at first. It's much harder for students to understand what's being taught when they struggle to understand the language of instruction.

Teaching ELL students in their mother tongue first prevents them from getting behind as they learn a new language. In fact, according to UNESCO, "at least six years of mother tongue instruction is needed to reduce learning gaps for minority language speakers."

Multilingual education increases language capabilities in both the students' first and second languages.

Of course, students in the US and other English-speaking countries do need to learn English. But teaching young ELL students in their native language first actually leads to better English skills later on.

For example, in Mali, the official language is French. But many families speak indigenous African languages at home. Mali children who are taught in their mother tongue when they start school speak French better by the end of elementary school than students educated in French alone.

Parental involvement is key to student success. But how can we expect parents to be involved if they don't understand what's going on? Want parents with low English proficiency to stay engaged in their children's schooling? Multilingual education combined with a well-planned translation program will enable and encourage their participation.

Of course, it's also important that your translated outreach materials be culturally sensitive and tailored to the parents at your school.

According to UNESCO, multilingual education helps improve test scores, encourages academic achievement and reduces dropout rates. Education is one of the most effective ways to reduce poverty in vulnerable populations. For example, UNESCO notes that one extra year of school increases earnings by 10% for individuals overall and 20% for women.

As this report from the New York Department of Education notes, ELL students who maintained proficiency in their native language had better self-esteem because they understood that their culture and heritage were valued.

Of course, your institution may not have the resources to offer the type of fully multilingual education promoted by UNESCO. Even so, you can encourage ELL student success by:

VIA can help. We are the nation’s leading professional, online translation service for school districts, and we combine our expertise with smart technologies and an award-winning project management process. Want to learn more? Contact us here.